Finding the Fountain of Youth on your plate While the Fountain of Youth remains a mythical spring of restoration for anyone who drinks or bathes in its waters, many aging athletes are extending their competitive careers by turning to the restorative powers of a whole-foods, plant-based diet. As a hockey player north of age 50 who is on the ice daily with elite college, former pro and amateur athletes sometimes more than 30 years younger than me, I proudly reveal that being a plant-powered athlete is my secret to being able to compete day after day at a high level. In professional sports where as soon as an athlete turns 30 their remaining days as a pro automatically become numbered, athletes across the sporting world are dipping into the same Fountain of Youth – a whole-foods, plant-based diet – to help them stay in the game.

When the NFL kicks off its season in September, Tom Brady will be 43. The future Hall of Famer began eating primarily plant based a number of years ago in Boston, which inspired another Boston athlete, Zdeno Chara, the 43-year-old captain of the Boston Bruins, to adopt a plant-based diet several seasons ago. During Chase Utley’s final season with the Los Angeles Dodgers at age 39, not only did he ditch dairy, but he convinced almost a third of the team’s roster to join him in going dairy free. When American track cyclist Dotsie Bausch stood on the podium at the 2012 London Olympic Games to receive a silver medal, it was shortly before her 40th birthday, making her the oldest athlete ever to medal in her discipline.

“My plant-based diet was my advantage. Within weeks of going plant based, I noticed a significant difference in my recovery. I could feel better faster and get right back to intense training, whereas before I needed much more time to rehab from the exertion I was putting my body through. By cycling standards, I had passed my prime, but my body felt great and I was able to gain a level of fitness I had never experienced before,” said Bausch who concluded her 14-year pro cycling career at the Olympics and now serves as Executive Director of Switch4Good, a health- and performance-focused nonprofit that advocates a dairy-free lifestyle.

As a veteran athlete, I find it encouraging and affirming to read stories about pro athletes turning to plant-based eating to help them continue to perform at a high level as they age. Because of advances in training and recovery methodology, including nutrition, athletes are stronger, faster, bigger and fitter than ever. With the margins of victory being so small, athletes seek out every possible advantage. That advantage can often be found by what they put on their plates.

“As we age, most of us realize that food affects us more than we thought. It can be a great detriment or a terrific health-enhancer. Think of it this way: many of us grew up on frozen chicken nuggets and artificially flavored fruit snacks. Many of us no longer eat that way because we know we’d feel more sluggish and probably be carrying a few unwanted pounds. We all adapt our food choices as we age, and athletes are the same. We know that the more good food we put into our body, the longer we can sustain our physical prime. Animal-based foods simply don’t cut it when it comes to career longevity,” said Bausch who is one of the athletes featured in the documentary film “The Game Changers” and was named by VegNews as one of the top 20 most influential vegans in the world.

Bausch, who has a nutrition degree from Cornell University, believes that everyone, not just professional and amateur athletes, can benefit from eating a plant-based diet.

“We all deserve to feel amazing every day in whatever we do—whether that’s riding a bike for six hours or powering through a six-hour strategy meeting at work. A whole-foods, plant-based diet is 64 times more antioxidant-rich than an animal-based diet. Antioxidants are key – not just for athletes, but for everyone. They help fight free radicals in the body and reduce inflammation. Athletes need to reduce as much inflammation as possible because that will allow them to recover faster and get back to training. Inflammation is also the nexus of chronic disease, which is why it is imperative that everyone eat an antioxidant-rich diet regardless of their level of exercise. Plants also contain an abundance of micronutrients that keep the body working efficiently so in that way, eating more plants will make a difference. Animal-based foods can cause inflammation, constrict blood flow and impair breathing—all of which inhibit athletic performance and general wellbeing. To truly experience the benefits of a plant-based diet, cut out the animals—not just meat, but dairy, eggs, and fish as well,” said the cohost of the Switch4Good podcast.

Young bodies recover rapidly from the muscle breakdown that occurs during training and competition. Just like our metabolism slows as we age, the speed at which our muscles repair and rebuild slows with age. But there are ways to keep the recovery process functioning swiftly and that involves food choices. The body burns excess energy struggling to break down, digest and absorb proteins, fats, vitamins and minerals that come from ingesting animal flesh and animal products such as eggs, cow’s milk, cheese and yogurt. Nutrition gleaned from consuming plant-based foods is absorbed much easier and readily, requiring less energy for digestion and freeing that energy to be used to repair muscle damage.

“Recovery is a lot better. I still have some inflammation, but not nearly as much as I did when I was eating dairy,” 31-year-old NBA center DeAndre Jordan said in an interview with CloseUp360. Jordan committed to a vegan diet two years ago.

“I have more energy, which was weird to me in the beginning because I was, like, ‘I know I’m gonna be tired,’ but it was the total opposite.”

Bausch said, “It all comes down to recovery time and doing the least amount of damage to your body. Exercise already puts stress on the body. An athlete doesn’t need to cause excess inflammation by consuming animal products. The antioxidant and micronutrient content of plant-based foods also helps the body function at optimum levels.”

Advice that I hear frequently from the doctors and nutritionists that I interview is to “eat food as close to the way it came out of the ground.” That is the “whole foods” portion of the recommended whole-foods, plant-based diet. It means minimizing the intake of processed foods, which are often filled with sodium, fat and excess calories. The other component that experts urge is variety. The mantra “Eat the rainbow” refers to eating a colorful variety of lush fruits and vegetables.

“I wouldn’t recommend sticking to just a handful of foods since diet variety will provide you with the most diversity and abundance of nutrients. Incorporate plenty of greens like kale and broccoli, grains and starches such as sweet potatoes, and beans and legumes. I think lentils are the most perfect food: they’re packed with protein and have no insulin spike. Antioxidant-rich foods are also key such as beets, leafy greens and cacao,” said Bausch.

When I race after the puck in the corners, my competition that is at least half my age does not hold anything back. That puck battle is strictly a matter of energy and the ability to perform, not age. What keeps me competing and recovering as fast as possible is a whole-foods, plant-based diet. Brady, Chara, Utley, Jordan and Bausch are among the growing number of seasoned athletes who found that removing animals and dairy products from their diet, minimizing processed foods and eating more plants helps increase energy while slowing the aging process for athletes. Any active individual who makes the dietary changes will experience similar results. And even when the odds are stacked against you, you may be surprised by what you can accomplish in your sporting career at an advanced age. Just ask Bausch.

“It is impossible to determine if I would have made the (US Olympic) team without making the switch, but in a world of ‘ifs,’ the reality is that I trained plant-based and succeeded plant-based. I didn’t just make the team—I made the team that earned a silver medal going into the race as underdogs.” 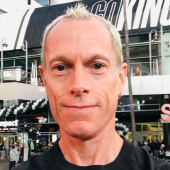 Beat the Heat with these Summertime Recipes from the “Plant-based Passionistas!”